This post has been a long time coming… It never felt like the right time to take after shots and after much deliberation I figured let's just pull the trigger already.  I took these photos Sunday since it was so nice and sunny out.

When we first purchased our home it was in interesting shape. It was a short sale and had more than a few cosmetic issues (it still does) and popcorn ceilings filled with asbestos. We had our work cut out for us. We spent a month working on it before we moved in and we are still working on it today.

We have come a long way baby,  and this is very present in our kitchen.

Our kitchen’s before pictures: 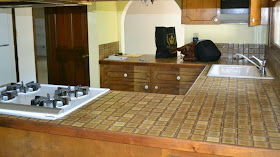 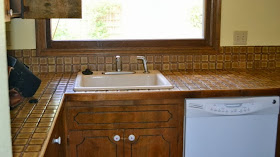 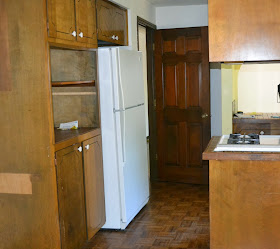 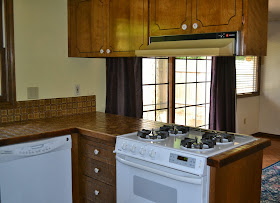 Yup totally Brown and icky 1970s kitchen.  The thing I loved about it was there is lots of storage, and the pass through to the dining room is awesome. The brown was really dated and made the room feel so dark.

Eventually we will remodel the kitchen completely but in the meantime living with this brown hot mess was just not do able.

Here are the steps I took to transform this kitchen.

Painted the lovely brown tile with HOMEX bath and tile epoxy. I did this step before we moved in and it was very stinky.  I had to wear gloves, eye protection and a respirator. I had seen this idea over on this blog.
It took two coats to do the entire thing.  So far its holding up ok, and it covered the icky grout and tile but I probably will need to do a touchup coat at some point.

I painted the entire Kitchen in Crisp Linen by Sherwin Williams. I had it colour matched to Behr at Home Depot because it was less pricey and it worked just fine. (I don't know if you could tell in the before shots but yellow was the original wall colour in here) 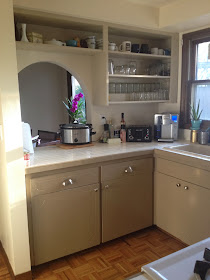 I did use a Benjamin Moore Primer on the cabinets, Stix. And it was fantastic.  I opted to do two different colors; for the top cabinets I used Khaki Shade (color match to Sherwin Williams) and Sandy Ridge (also SW colour match)  for the bottom. Both were semi gloss.

When painting cabinets you really should use paint specifically made for that application, such as  Benjamin Moore Advance Paint, but I spaced this out and bought a bunch of paint at the same time at Home Depot and ended up buying Behr as well for the cabinets.

Fortunately the Behr paint turned out just fine, but it does need a few touchups.  I have to imagine that might be the case with any paint.

I swapped out all the hinges for chrome and purchased new door pulls and handles on Amazon. (I even had a few extra pulls to revamp the bathroom pulls) 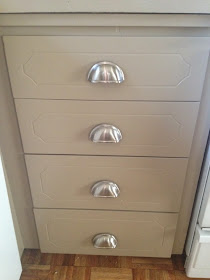 We got a new faucet for the sink 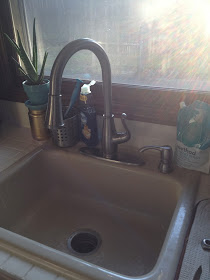 It took me a week to do everything (not including the new faucet which my husband did :) and it was a lot of work but I think totally worth it.

Our kitchen light we got at Ikea and I just love it. 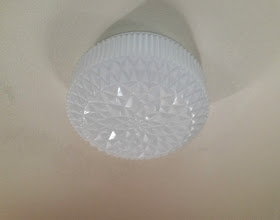 Initially I had planned on adding glass to the missing cabinet doors to give it more of an open feel, but I actually really like the open shelving so for now am leaving it this way. 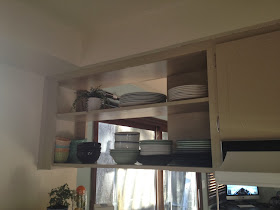 Eventually we will remodel and take over the family room my husband is using as his "man cave/office" but until we do, these  fairly inexpensive changes and the time spent on it was well worth it.